Once you get past the cold, the driving, blinding snow, the snow blowing, shoveling and the resulting aches and pains, a good old fashioned snow storm can also be a writer’s best friend.  How you say?

Well, given the choice of clearing a foot of heavy, wet snow off treacherously steep or mile-long driveways (like ours) or writing about summertime in the Finger Lakes, which would you rather do? For us, writing wins hands down. Especially when what we’re working on is our upcoming novel, The Pie Sisters.

Shelby, Yeardley, and Lily Lane are three twenty-something sisters whose lives have taken them each in very different directions. When their paths cross at a lakeside reunion to celebrate their aunt’s birthday, they’re launched on a touching journey of self-discovery that forces them to question, defend, and finally claim what is theirs.

Writing this novel is such an amazing experience for us for several reasons. First, over several months of outlining and drafting, we’ve come to really love these girls.  Each one possesses certain qualities–some good, some not so much–that we share and that our readers will hopefully identify with too. Shelby, the eldest, is a born leader and self-appointed caretaker of her sisters. Always the ‘responsible one’, she’s beginning to wonder when did her life become so predictable? Middle child Yeardley is struggling. A ship without an anchor, she desperately needs a compass to help her find her way home. And Lily, the baby of the family, is so accustomed to letting people do things for her, she’s never had to do anything herself. That’s about to change.

Though the story is set in the Finger Lakes where Vikki grew up vacationing with her family, Leigh also has fond memories of summering with her family at a lakeside camp in Maine. The time we’ve spent in these magical communities known as lake cottages or camps is both the origin and the inspiration for writing The Pie Sisters. As we shared, compared, and swapped tales of growing up on a lake, we realized how much these places and the people we’ve shared them with have influenced our lives. That transformational power provides the basis for our story with some of our own most treasured experiences incorporated for good measure.

So you see, to us, a blizzard isn’t something to dread; it’s an excuse to spend more time with our computers reliving happy memories and bringing the Lane sisters to technicolor life. And that beats shoveling any day.

Bring your reading group to life with a visit from Leigh and Victoria. Learn the stories behind each of our stories, how co-authoring works, and what’s next for Brown Corliss Books. Contact us here, to have us attend your next book club meeting. 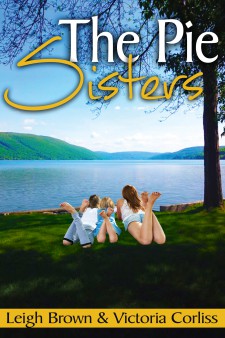 Find Our Books At a Bookstore or Gift shop Near You: